I have been accused of introducing complexity into situations 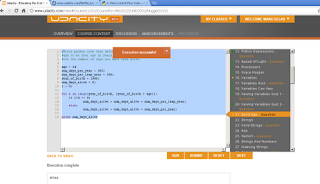 The summer is definitely here:
http://www.youtube.com/watch?v=ALspag8uSCU
Perfect post-breakup song, I guess... I wouldn't know either way.
at Thursday, February 23, 2012 No comments:

How To Save A Life

http://www.youtube.com/watch?v=EcbgpiKyUbs
at Thursday, February 23, 2012 No comments:

I have a link, I should be able to paste it and get the video I want. What I get instead is a list of possible mismatches... Oh yeah, I think that second one is what I was looking for! Blogger, why do you "second guess" me?

Am I allowed to link to videos which you will convert into an embed (like Posterous, Tumblr) or any other mature blogging platform? Please implement this soon!

Edit: I'm finally glad that they got the MIME:mutlipart/mixed-content embed posts via email thing right... Glad I don't have to upload pictures anymore!
at Sunday, February 05, 2012 No comments:

It's quite odd how it happened really.

(I like how I start off with describing how odd things are... Duh, if things were humdrum and the usual my pocket-got-picked stuff was what had happened, it wouldn't be odd at all really.)

So, what happened was this.

My mother seems to misplace her phone's charger every now and then. I seem to be able to find it all over the place... Except that she left on a trip to Chennai a few days ago and needed to take her phone along. She couldn't find her charger in the last five minutes before departing for the train station to catch the 4:25 PM Shatabdi.

So I gave her my phone's charger for the time being.

After she left, I had other things on my mind. One of them was not finding the missing charger. Before I knew it, I had a early shift the next day, and woke up to find that my phone had a one energy bar of life left, and was desperately clinging to it. So I did the next sensible thing, I turned off the connections to the second SIM, keeping the primary SIM active. (The X1-01 is a nice dual SIM phone, if you're into that kind of thing with using the best features offered by two networks/rate plans.)

I also realised that I wouldn't last till mother got back with my charger. Plus I didn't have the time/energy/commitment/good sense to find hers. So I went out to the nearby store on the way to work (a little late I might add) and picked one up.

The last thing I remember  is sending a text to my friends/colleagues that I was on the way to work.

So I lost a charger but had a phone. Then got a charger and lost the phone. Irony.

Also, there's a first time for everything. Last time my phone went under a truck. Strange how hard it is to hold on these things... Let's hope the replacement lasts.
at Sunday, February 05, 2012 No comments:

Back to Posting Here

I'm tired of having more than a single blog/website/point of communication.
I'm going back to using Blogger. Screw the concerns over Google and it's new privacy policy. It really doesn't bother me (since I don't read legalese,) and if  I were at all concerned about privacy, I would be shutting myself in a cave a denying that the Internet ever existed... Hell! I wouldn't even know who Privacy was, and why everybody's getting their skirt twisted in a bunch about how she's doing!
Alright, so I'm back here for now.
Let us begin.
at Sunday, February 05, 2012 No comments: