I find this odd. I have nothing to write about today. Let's try reasoning it out.

Well, that chart should clear things up! It clearly shows I'm not GTD in a day. Even if I don't hit GTD-nirvana I'd like to say, I GSDT (Got Something Done Today).

Time to rethink my whole approach to doing things. This will simply not work out.

I've been thinking about performing some analysis on how I spend my time during my waking hours. And waking hours here, includes all the time I spend, staying up late into the night (up till the point when it's really really early in the morning), barely awake and unable to think. Of course, I could use that data to track how lack of sleep affects my productivity.

(Of course, that means that I now have to come up with some way to measure my productivity, how would I do that. This requires some thought)

This is interesting. I could also measure the effect of meditation on my productivity. (and maybe that would help me be more regular in my practice)

Interesting, times of meals. The time I wake up. The temperature. The weather. The news. How I feel. Sick/unwell. It could all be documented and measured against productivity...

This sounds like the beginning of a very fun experiment.

And if I could build a system that considers all this data.

Listening to the latest episode of twit again.

Once you get into the habit of doing something a certain way, you get used to doing it that way. If your webhost seems to support all the things that you throw onto its servers, then you get used to stuff working just like that. (I wouldn't say that for the laconi.ca install, but still, most of it just worked out of the tarball!)

I stopped checking requirements pages long ago. I assumed that since Wordpress 2.7 worked, WP 2.8 would also work. 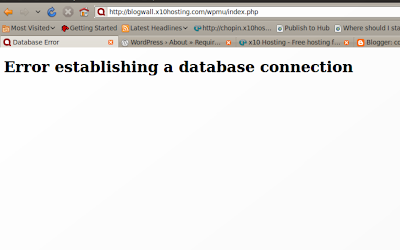 UPDATE: I was wondering whether the earlier releases of WP MU were to be found. Guess I should have looked at the trac: Wordpress MU 2.7

And I finally have an alternative to Facebook: extensible, awesome, and Open Source. [EDIT] ELGG is written in PHP and is completely open source. And it comes with some excellent documentation all well written and covering a wide range of topics to get everyone the help they need - whether you're just trying to install ELGG or write plugins for it, or contribute code for the next version. 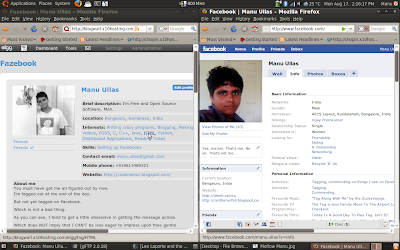 sadly, there are limits to how good a face I can present.

Everything you've wanted to ask Facebook for, but were afraid to.

Update: There are even themes to mimic the whole facebook look. I have not been able to customize the instance as much as I want to because I'm having trouble finding my way through the documentation. Maybe today just isn't the right day to wend my way through pages and pages of documentation. There are some kinks to be worked out. Clicking on a link to list pages in the Installation category took me to an error page stating that I did not have the required privileges to edit the page.

But there are various examples of ELGG instances that have been customized to look nothing like the default install I currently have up.

Also, I doubt anybody who still uses Facebook daily without any concern for their IP policy will really find any reason to move to an ELGG instance. That includes most of my friends. Maybe making the interface more click-whiz-popup-ish will change that. Right now, it's very much new-page-loading based. But it's a great system nonetheless. I am amazed by the fact that this is all very very open source (I haven't been able to find a mention of the license it's been released under, still, maybe I actually need to look into the code, UPDATE: Wikipedia says it's GPL v2)

Maybe I've been spoilt by Anil Dash and his pushbutton web post. Maybe I'm just hoping for something better than Facebook right now. Anything would do.

I'm even trying to set up a Wordpress MU instance now. And yes, it's for BuddyPress. Right now, I can't seem to get past the wp-config.php stage. Will update when I do.
at Monday, August 17, 2009 No comments:

is a number. You may think of it as lucky, unlucky, or just a number. Whatever your opinion on thirteen is, I'd simply nod my head and say, "Sure, it's exactly as you say! It's
at Monday, August 17, 2009 No comments:

Checking out this free alternative to Facebook called ELGG. And it does resemble Facebook in a lot of ways, and the best part, in some ways even better than Facebook. All this without multi-million dollar stock-swaps and what not.

While most people wouldn't have the time (the kind of people who aren't there) or they wouldn't have the knowledge to (I'm assuming you don't do legalspeak) parse Facebook's Terms of Service, Privacy Policy and what they're now calling Statement of Rights and Responsibilities (SRR).

That's pretty evident from the number of people who've liked it! Seriously, did any of you 3000+ people actually bother to go through the first two clauses of the document that pretty much says in clear terms that Facebook has a right to anything and everything that you put on Facebook:

In order for us to use certain types of content and provide you with Facebook, you agree to the following:

This IP License ends when you delete your IP content or your account (except to the extent your content has been shared with others, and they have not deleted it).

Okay, I see that the last bit acts as a relief, to be exempt from this agreement, you simply have to not be on Facebook. It's a binary choice, right?! So, if you share a note or post a picture, or post a comment on the picture, or post a tag on the picture about the comment that you're going to write about the tag, then you'd better make darn well sure that you're okay with giving Facebook rights to milk it for all that's it is worth as well.

Although from what I've seen on Facebook, I don't know why and I can't see how they'd even think off profiting off this

Google's done something similiar to this with their Picasa Web Albums service: (their ToS is the same that applies for all Google services)

But they do add a clause here stating clearly what they intend to do with that license:

This licence is for the sole purpose of enabling Google to display, distribute and promote the Services and may be revoked for certain Services as defined in the Additional Terms of those Services.

And here comes the Share and Share Alike (with an exception clause for anybody profiting in the process):

It's almost like a BY licence! Except that's not what it's called! Really, they should use those familiar and comforting logos that CC uses, 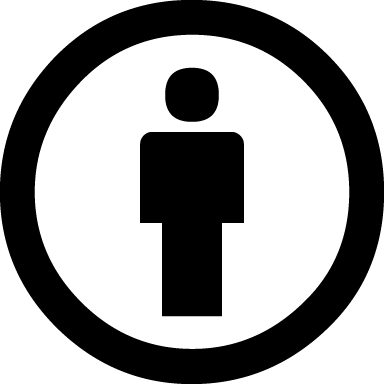 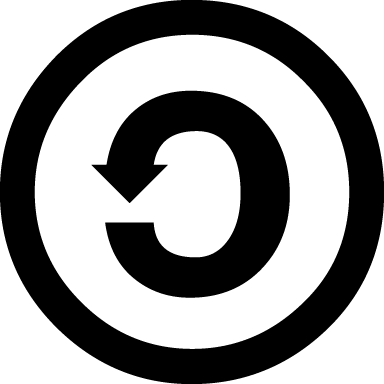 but to convince us that, "Yes, that's exactly what we're going to be doing, except, we're making money of it. After all, there should be something in this for all of us. You've found your timesink. And we've got our moneyplant!"


They really should make these terms clearer to people instead of having non-lawyers like me (although my grandfather is one, and he's not even into IP law) parse it. I thought Google would be one of those forward thinking companies who'd actually put a short summary of the legal terms before the actual diatribe so that people would at least be inclined to know what they're getting into. Because you know, once Google gets into it, almost every other service is likely to follow their model. That's why they're Google. They set the (dodge)ball rolling into the Foursquare. (Although I never missed Dodgeball because I never got to use it, it would have been fun to link to their website just now. Oh wait!)

Funny, Dodgeball sounds like the service my friend Rahul and I were planning to implement as a final semester project. I remember proposing the '@' symbol as a check-in symbol. And while I'd heard references made about Dodgeball, I'd never actually done much research into in detail. And the best part, I'd even proposed using email-over-SMS as a method for client-server interaction. Amazing coincidence.

Our only worry was how we'd go about implementing the service. We'd have to buy a two-way SMS gateway to begin with. And then there was the problem of not knowing how this thing would work. We're not telecom engineers here. :-) But it would have had mass appeal. I still think we can implement it. And text messages are used far more than anything else here. Infact at a cost of no more than INR 60 a month, we could have users checking from all over the city. 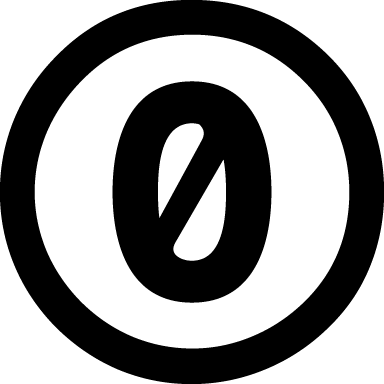 And the best part: it'd all be for free. Wonder if anybody's done it already.

Okay, huge rathole, I don't know how I got into it, but let's continue. Or let's just end it here. I'll test out ELGG and post and update.

Maybe I'll even call over a few of my friends from Facebook and see if they agree with fuckfacebook. (C) that you douches! Ha! Wait, I'll post this on Facebook.

On second thought, it's time to go sleep.

FriendFeed got lazy again, it doesn't seem to be working! Darn it!
at Sunday, August 16, 2009 No comments:

Just redirected feed traffic in settings to Feedburner. And no, that doesn't seem to improve anything at Google Reader's end.

How does one get Google Reader to pick itself up off it's lazy ass and do some real work?

From a look at my Google Reader Feed, it appears that Fake Steve is now back and posting. Good to know.
at Sunday, August 16, 2009 No comments:

Can't wait for pubsubhubbub to go mainstream... Imagine the pushing around once everybody supports it.

Right now there's only one plugin I can find for Wordpress.

Once other CMSes support it, we'll be pushing feeds like crazy.

And I'm shocked that Google Reader picks up feeds like me picking myself up and out of bed every day for the past two months.

This is good, I'm beginning to like this better than my random rants.

But still, it begs the question, where is this all headed?
at Sunday, August 16, 2009 No comments:

Feedburner picks up the feed that was just published.

PingShot notifies the Pubsubhubbub node that my feed was updated with a new post.

Funny that FriendFeed doesn't support the publishing part of Pubsubhubbub, their feeds look all messed up in Google Reader.

is it Google Reader's fault, because it doesn't support the Subscriber part of the protocol?

Looks like it's taking into account the time the post was created and not the time of publication, that's something that will have to be fixed.
at Sunday, August 16, 2009 No comments:

Because we love to be free.

Timestamps on the published feed item in Friendfeed is off. I don't think it took me 42 seconds to write this.

So, what's two all about? Twice bitten, once shy?

Two bottles of bourbon, and I can't even get idioms right?

Wait, that wasn't an idiom was, it?

Planning to test out pubsubhubub. If all goes well, the second post should show up in the feed almost immediately.

Has FeedBurner implemented pubsubhubbub yet? How do I find out?

The only way, by finding out.