on a lot of things now.
But I don't think you should ever start a conversation with me with any of the words listed below, in any order:
How
Is
It
Going
Are
You
Fine
Okay
What's
Up
Don't insult your intelligence, you could do better with some more effort.
You're wasting my time.
You're wasting your time.
You're not making my day any better.
You may regret being the cause for further decline in my stock of faith in humanity.
Be nice! Open your mind!
The weather, politics, human sexuality, your sexuality, anything, politics (again), the elections, goondaism, travel, food, places, people, yourself, (what you think you know about) myself, ourselves, how we were, how we are, how we will be, how many kids do you want, do you want marriage, do you want to be buried, cremated, do you believe in long-term commitment, do you want sleep around with everybody who is willing to, things that will interest me, things that will intrigue, things that will be of value. Not just the same old dull rehearsed bullshit that you trot out to everybody else, because don't just assume that I'll take that and pretend we're friends, because let's face it, we're not, I will cut you off quicker than you can't say "Wassup!"
You'll be WasshedUp before you know it.
Tread carefully.
Give a shit. or more. Give yourself.
Pretend that you're alone now. And talk into the silence.
Try it out. You'll find that it's easier to make all your conversations more interesting, and meaningful.
I don't care if you don't have the time.
I want you to find it. And you can be sure that the kindness will be repaid someday.
I'm beginning to feel that all this is wasted on you.
Keep me from giving up.
I hope you'll care enough to do so.
You know who you are. Or do you?
at Tuesday, October 21, 2008 No comments:

nobody cares anymore.
Maybe it's the effect of a new Keane album, but I can't seem to help thinking about the don't really give a crap aura that everybody else gives off. And is there an explanation for this feeling?
Simply put, because everybody else is a person, and they have themselves to worry about before they can even begin to think about worying about everybody else.

We say these words again and again
But they still sound the same
It was in my eyes, in my eyes
They were just easy lies

Seems to sound right, doesn't it? All that crap people give about you being so-and-so, smart, cute, funny, "the best", the "best there was, the best there is, the best there ever will be".
Seems wrong of me to rant but this song seems to resonate with those feelings.
Why is that Keane seems to come up with songs that stir up the old feelings brew inside? And so many words seem to come tumbling out. And I realise things that I knew all along. And it seems to leave me bitterer and angrier at the world.
Wonder whether this is what they intended?
Does it matter what I think? Finally, I am just me. And nobody understands me, as far I know! Oh yes, there are people who think they've got me all put down, but how is it possible for anybody to just say that they know you?
Questions:
Is there anybody who truly knows me? Does that matter? Do I know myself? Do I care? Is it really important that you know yourself before you attempt figuring out other people?
I feel frustrated!
Nothing a bath won't cure.
Met Siddharth, Suhas at Ragam for coffee on a cold, orangey-pink, dusk for the third consecutive day in a row. Not counting Saturday and Sunday.
Here are a few things that I need to get out of the way:
Good start. Now let's get fixing!
at Tuesday, October 21, 2008 No comments:

Wet Behind The Ears

I seem to have fallen into the habit of taking my cellphone with me into the loo. I don't know why, but it seems to make me feel a lot better taking a dump with cellphone in hand listening to songs about cameras and f***ing boyfriends and those other things that make the world go around.

(If you think this is unusual, and yes irresponsible behaviour on anybody with a cellphone, then just come by and ask for the guy who never has to go to the toilet during exam time, and also ask for the guy who does email while downloading junk. He can be reached on thatguywhodoeshisemail@thecrapp.er)

I usually put the phone on the counter next to the sink. And proceed with whatever it is that I've come there to do.

The speaker on the back is capable of putting out a loud enough sound to make things audible when one has the shower going in full spray mode, and is nice when you can sing along with a guide. At least it drowns out the parts of the song where you go completely off-key and is a comfort to people like me.

Somehow, I can never seem to get a song that sounds perfectly alright in my head to come out sounding right when singing it. Except for that time when I'm using my falsetto voice. It always seems to sound great when I emulate the female voice. Of course, it may sound a little gruffy but that adds that little bit of sensuality to the mix, and that makes the ladies swoon all that faster. (The ones who are into sexy-vocal-chord equipped ladies, that is. And for once one of my virtues doesn't seem to benefit me, because for those of you who know me, I am the last individual on earth who'd fit that description.)

(Actually, let's go down this path: where did that "last individual on earth..." expression come up. Why WOULD anybody want to be that person! Earth would be the dullest place to be if you were that person. You'd have the #1 blog on Technorati, that nobody would be reading! Your blog would be the only thing people would see when they hit the "I Feel Lucky" (so lucky that you don't exist to make the most of all that luck!) button on Google, but there wouldn't be anybody to do that. And thinking about Google, there'd be nobody to come up with all these cool free services! and nobody to use them. Nobody at college, nobody to say Hello to, who'd you call, you'd have the best sounding call in the network, because there'd be no congestion, but there are only so many times you can blog your conversation with the Nice Fake Lady At The Other End when you dial 121, just thinking about it makes me feel sad. all that goodness, and nobody to share it with! Nobody! Sharing is good, nothing changes that.)

And where were we? Yes, back to the old shower-singing routine. I was crooning some happy folksy tune one day, (pa pa pa/papapapapapapapapapa...) and I get a text message just as I was hitting that high'pa' (yes! I was feelin' hyper too!) note. So, my phone goes ding ding and the Pandora's soapbox for soapy trouble is opened.

I happened to be shampooing at that time. And I was reading the instructions behind the bottle, or something to that effect. (I was pondering on how sad and low on inspiration the people who write the stuff on the back of shampoo bottles had become.

Something like this would be fun to read:
1. Take generous amounts (you can always buy more later)
2. Work into lather with twisty, circly and flippity actions, like you're mucking about in an Ocean Of White Softyness
3. Go nuts putting it on everything you can see before the foamy stuff gets into your eyes
4. The fun is over: it's in your eyes, try waiting for at least 5 minutes, for the Chemical X to work it's magic on your scalp. Meanwhile think of something to explain why you look like you dragged self out of a disco at 3 AM on a Saturday (not applicable in Bangalore) and spent the rest of the night counting the number of pavement slabs till you got home (again, not applicable in Bangalore, except if you're a cop), and then spent the rest of the weekend trying to make sense of these instructions
5. Rinse (eyes if required, most probably) and repeat if required. (yes, let's do this all again!)

This would be something a lot of people could relate to. Making the shampooing experience better, and not just wasting all that space on the back with stuff that people don't need guidance in.)

And where were we? Yes, the song had stopped.

I was in step 2 of the shampooing process. Out of the tub, over to the phone. Must get that song going again. And picking up the phone like I always do. In a warm hand-embrace, encircling it with all my fingers, I realise that in step 2 the hand is "mucking about in an Ocean Of White Softyness".

And yes, the phone wasn't too pleased when it got step 2. Currently, the loudspeaker on the back sounds a little hoarse. And all songs sound like my renditions of them. And now, I can't fake sing in the shower. And I feel very sad about that. But there is hope that someday everything will clear up.

because you see, it's not this: 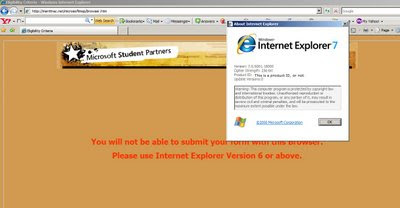 UPDATE: Of course, I was being totally snarky here! My for all things locked into IE is what caused that tirade back there. I regret (a little) having made the irrational-sounding statements that I might have made earlier. Maybe it was the fact that I'd just woken up from a deep sleep where I dreamt of having crushed Microsoft with a FOSS-bomb (whatever that is).
It works: 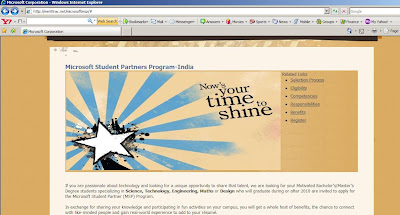 Sorry about that Microhard. :-)
And thanks, Nuthan for pointing out my oversight. To think of all the people who'd have read this and been misled. Oh, the despair, the misinformation! Oh!
Update: An examination of the HTML source of the linked page shows this. Can't Firefox process .aspx? Can't Chrome? Why do people assume that everybody uses IE for everything!
at Thursday, October 02, 2008 No comments:

Tee Around The Bend

Due North? Due South? Due West? Due East?

Not too coherent, right?

That's what I thought. Getting well past into the end of the First Season of 24. And it doesn't look like things are getting any better, but I know it will turn out alright in the end. There are a few things I must do. And now, I am gulping down my second mug of tea in the past half hour. And I don't think I can quite stomach this one.

I've always liked tea, but somehow I find myself pre-disposed to dissatisfaction whenever I think of the thing. It's not really done me any good. I've never actually got a kick out of drinking the thing. Maybe it's one of those useless dependencies that one can never quite get over. It's seems harshg to be judging the drink for something that it never promised in the first place.

Why must we drink tea? It's a good question? Or coffee? Why can't we just get our butts off our chairs and do what we are meant to do. Just screw the beverages. Stop depending on things. Just stop!

I would like to go to every person I know, and just grab them and shake them about till all those silly things that people depend upon for 'satisfaction' aka 'just-righty-ness' fall out.

Going to throw this one out. (plastic cracking)
at Wednesday, October 01, 2008 No comments: