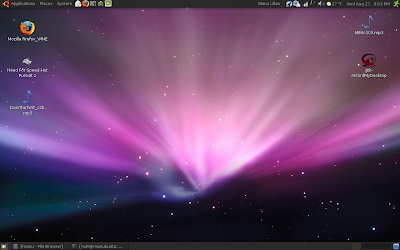 Why would I want Windows? I still want a Mac though.
at Wednesday, August 27, 2008 No comments:

What are you trying to tell me here?

So, all in all it was one exciting night. A first for me, and for the iPhone. It's heart has been opened (almost, but not quite). And it feels very different.

Used mother's credit card to register with the iTunes store that requires you to have a credit card for free apps as well. (Part of their FairPlay DRM bogus!)

Installed a bunch of apps. Woke up the next morning, and restored the phone's contacts, calendars and settings from backup.

Started playing with things the next morning. Wifi doesn't work too well, the signal being too weak most of the time. Keep losing connections at different locations around the house unless you keep it in fixed positions for a few minutes each.

The phone's back in good shape now, and Diya (who seems to have become extremely possessive over the weekend) has forbidden me from further contact with the phone. And so I started thinking about working on Android. I have to work with Java which serves me very well since I have a course on Java this semester. It looks like fun.

Downloading the new Android SDK as we speak.

So Let It Slide 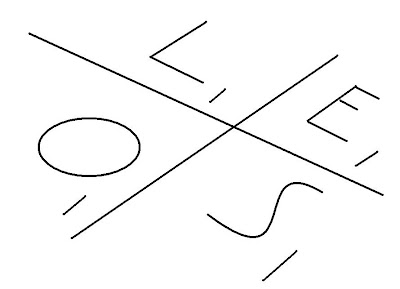 Lose to win,
Win to lose.

What was the saying again?

Lose at Scrabble, accept it as a part of a life - yours. Lose at Scrabble, and you win at losing Because losing, like life, is about acceptance, and a willingness to make things better Accept things as they are, and you'll have time to go outside and bask in the sunshine Come back another day, and you'll have another go Take your time, you have nothing to lose But the fear of losing Don't deny, what you know Use the time to learn And there will come a time When you have no fear of losing And that's when you're free. Free from expectation,
Promised victory,
I'll do better,
I'm no go-getter,
The sun shall setter,
In some time, a new day,
Will come, and we'll play another game,
Things may still be the same,
I wouldn't have it any other way.

Forgive my sorry rant on the losing thing. Time to pick up the pieces, and move on.

Because, Scrabble, is a lot like life. It's made up of words seem to make sense, when looked at on a turn-by-turn basis, but zoom out, and you'll find a story there. Somewhere.

Updated: Filling In The Gaps (And How?) 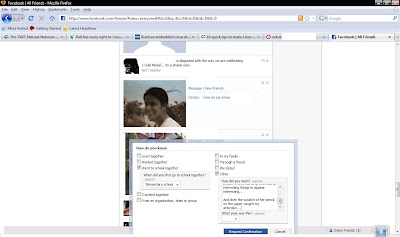 Time on your hands? Got nothing better to do?

Why don't you think about doing something? Anything!

Being productive, inspirational, and of some use to others who are too damn sloppy to fill in their profile connection details is probably not the best way to spend your time, but I argue, it's the best thing you could do for yourself.

Because, it's all about reliving those awkward moments, and standing up to reclaim those lost memories. Sure! you can upload photos and tag every last pixel, but then, don't you want to connect through those times that you didn't have a camera at hand? Sure I know there are people who are just waiting to upload the pictures they capture 5 microseconds after the shutter closes, but come on, let's be practical. Not everyone is a shutterbugger!

Which is why we must fill in the gaps and we do that through profile details. There must be some way people can associate with all their friends. Those awkward moments will never die now thanks to Facebook.

And the best part, connection details show up in your news feed, so all your friends can find out about that time when you made a complete ass of yourself... An exercise in self-humiliation, but it is these things that keep us grounded, humble and ever ready to face another bout.

So, fear not gentle people, and fill in the gaps. Bridge the past and future with the memories that make us human, and grow stronger in your humiliation!

Unless, you know of a Lacuna Inc.!

Update: Certain people started asking me questions regarding this bit.
A 4-Step howto for those of you who've got better things to do than figure out how to get this done quickly.

Hit the Friends Tab at the top of the screen.

Step Two:
Use the search box to search for the friend you want to add details for or hit the 'Everyone' tab to get a list of all your friends in no particular order whatsoever. Or head on down to get a list of friends arranged by order of latest status update.

Step Three:
Found your friend? Then hit that small rectangle next to their link, and it'll open out as shown. Add the details you want and ask your friend to confirm these details.

I have always been curious about the BSD part of the UNIX universe, so I stepped into the unknown today and had my first taste of working with a currently supported distribution called OpenBSD.

OpenBSD is a sort of "more open" fork of the NetBSD project. And there's a fascinating story there as well, read more into the Wikipedia page for OpenBSD and you'll see what I'm talking about.
Wikipedia page on OpenBSD here.

And there's a wonderful book:
"Free For All: How Linux and the Free Software Movement Undercut the High Tech Titans" by Peter Wayner. It profiles the people and events behind open source distributions like Linux, OpenBSD and others. And going with the open source tradition, it too is available as in print and as a free digital download here. The book's chapter on BSD is here.

Getting Dirty: If you're looking for a distro where you control everything from the packages that are installed to the choice of shell, the algorithm used to encrypt /etc/shadow then this is the distribution for you. The package management scheme is really simple. Know where your package is? Fetch the path and get it! With just one command. Simple, get dirty with OS to know it fully. Imagine doing this with Windoze! (hypocritcal, I know.)

Warning: the system that you get is barebones and contains virtually nothing that you'll recognize if you're too comfortable with distros like Ubuntu and OpenSUSE. This is a truly customisable distritbution that forces you to take a look at the man documentation if you want anything done.

C? H? S? Can? How? Show!
The installation procedure, especially the hard drive partitioning scheme left me flummoxed and clutching at /s! You are simply put, forced to hand-code the partition table. You'll be confronting the C/H/Ss (Cylinders/Heads/Sectors) of your hard drive. The context-sensitive help is not very helpful if you have no clue what you're dealing with here, so, if you really need to use BSD, get a friends help, or print out a good walkthrough for reference. You'll need it during the installation, trust me.

Whew! I made it past the install but it doesn't boot!
This happened to me the first time. Some mess up in the partioning. Forgot to set the bootable flag on the correct partition! Had to re-install! :-)
Once you get past the partitioning stage, the rest is a breeze (make sure you're well cooled!). You'll also learn the importance of depending on the man pages here itself. Most of the tools you'll be using for the partitioning have man pages that can be pulled up within the installer itself. So, read the man pages, and you'll be hacking away at /dev/com0 in a couple of hours.

Now wait! so, this is just like Linux?
And for those of you who use linux: BSD is NOT linux. Repeat, NOT linux. It's a completely different implementation of the original AT&T UNIX. You'll find many things the same, especially the API calls, but if you're used to GUIs and find working with the terminal a hard job, then this is not for you, but if you're willing to learn and explore, then, go for it!

The OpenBSD and Linux developers team have never thought much about each other. It's like two nerds competing for marks! One more mark, and I'm better. Each thinks the others work is sucky! In fact, there are some interesting quotes:

Linus Torvalds wrote here:
And here is Theo's take on the Linux kernel:

It's terrible, everyone is using it, and they don't realize how bad it is. And the Linux people will just stick with it and add to it rather than stepping back and saying, 'This is garbage and we should fix it.
quoted in Lyons, Daniel. "Is Linux For Losers?", Forbes, 2005-06-16. URL accessed on 2007-01-10


Yep, no love lost there alright, but, they are some of the best minds on earth. And they make the best software out there!

rooting In:
You get a nice reassuring email in your /root/mail from the creator of the OpenBSD project Theo de Raadt when you boot in for the first time as root.
I'll put up a not-so-detailed, yet, superficial walkthrough of my installation process and what I went through post-install. That should make it a little clearer!


And so therefore:
It's a great distro to learn UNIX sys administration from the ground up. It leaves you with nothing but the documentation to depend and very little GUI to work with, if any.

It's all about the learning. I think I'll like OpenBSD. It's nothing like what I've experienced in the *NIX universe. And Puffy looks cute! Don't worry Tux! I <3 you too!

Most of my time these days are spend watching this screen now. With 26 current games, some of them with the same person, I can't find time for anything else.

A gentle muffled bing alerts me that it's my turn in one of those games.

And it's time to go.

I start playing when the sun is high in the sky, and before I know it, the sun has gone down and the room is in near perfect darkness. But light's overrated! You don't need light to play. All you need is fingers that haven't been sucked into Carpel tunnels and you should be ready to play the next move.

Friends whom I play with also alert me to my next move by sending an "I'm done" message.
Just making sure you get it. How considerate!

Spend a few minutes on the next one and it's time to wait for that bing again. What a life!

The rules are simple. Make as many words as you can, but efficiently. Don't have an unlimited supply of tiles, do we?

Fact: I've never managed to put down all 7 tiles! Maybe that'll be my last move. One bingo! And no more. 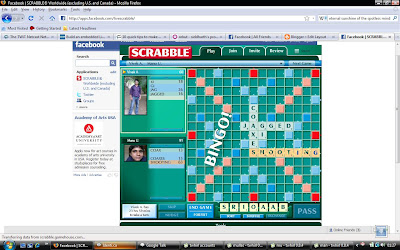